If I make better work later, I still won’t work otherwise than now; I mean it will be the same apple only riper — I myself won’t turn from what I’ve thought from the start. And this is why I say for my part, if I’m no good now, I won’t be any good later either — but if later, then now too. For wheat is wheat, even if it looks like grass at first to townsfolk — and the other way round too.

I go by Wilder, or Bewylder; the latter being my usual in-game name unless I use something dumb. I'm a 19yr old girl with an insane lack of social skills and a constant fluctuating interest in art and storytelling.

I like to play games to pass my time, before that I used to read awful YA fiction, thriller, or fantasy like The Hobbit. I'm horribly introverted and rely on people approaching me in order to make friends because I can't approach people myself. I've always wanted to learn to speak french! And play the guitar, but still haven't learnt to do either of those things. I've had a guitar sitting in my room for 4 years... So bad.

I love playing PvE games, because PvP intimidates me too much.. So I stick to things like World of Warcraft, Destiny, Minecraft, Dragon Age, and others like them!

I do digital art too, but I don't really have a direction I want it to go in. For a long time I wanted to pursue animation and comic illustration, but I'm not sure if I'm still going to pursue that haha. I draw a lot of DnD stuff for commissions.

Sometimes in my spare time I like to write - back when I was little I wanted to be an author - but I don't think my writing is up to par for that, honestly. I'm awful at keeping storylines together and consistent, even though I love analyzing that in media and other people's writings. I'm actually pretty nervous in sharing my writing with people in fear it doesn't make sense and confuses more than intrigues the reader.

Most of my intrigue for writing came from The Hobbit and Lord of The Rings, in the beginning. And it got influence by mythology, surprisingly. Since I was young, I had a major interest in all types of mythology, but the ones that stuck were Greek/Roman, and Japanese mythology. But I never got into Percy Jackson, and I never will. I watched that awful movie they made (which was apparently nothing like the books, but I digress) and it's haunted me ever since. Awful, awful movie. 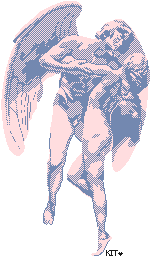